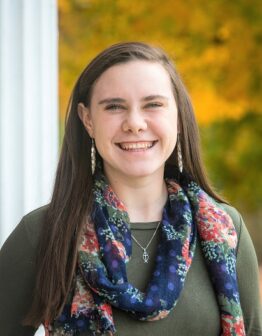 Rachel is a graduate of Grand Canyon University with a degree in Sports Management.

The Bigger Picture: A Message from Rachel Feldpausch

This spring season, I had the wonderful blessing of coaching Blue Ridge Christian’s Middle School and Varsity girls soccer teams. As with any sports season, we had wins and losses, successes and failures, plenty of sweat, and a few injuries along the way. The ladies have gone home with medals and trophies that will remind them of the season, but I am confident that each of them could share with you something that they saw the Lord do this season and that is far more valuable than any medal or trophy they will ever receive. Jesus Christ didn’t die on the cross so we could play soccer. Jesus Christ died so we could live in His love and share that love with others, and we just get to play soccer in the process. I’d like to share a testimony that is just a small picture of what God did this season, and I pray that it blesses you. 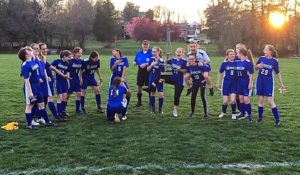 Toward the end of our season the varsity girls had the opportunity to play a private, secular school. It didn’t take long for us to realize that they were superior to us in soccer skill, but that didn’t mean much of anything to the girls. Throughout the first half we witnessed several of our opponents cry in response to the demeaning comments of their coach and each other. On our end, the girls were laughing and having the time of their lives, encouraging the other team and even sharing the gospel with them whenever there was a stoppage of play. When we reached halftime, I said, “Okay ladies, what are your thoughts?” and I will never forget what happened next. One of our captains looked me in the eyes and said, “Rachel, I think we just need to pray.” The girls then spent the remainder of the 10 minute halftime praying for the other team – that they would come to know Jesus, and that they would see His love in us. In the background of our prayers being lifted up we could hear the other coach screaming discouraging, demeaning things toward his athletes. The presence of the Spirit was undeniable and at the end of the game, after we had lost 6-2, all of the girls told me that the game was the most fun they had the entire season, and that it had even felt like a win. Their coach told me that he had never seen a team lose with so much enthusiasm. It was a perfect picture of the world contrasted with life in Jesus. Our opponents had it all: great soccer skills, expensive equipment, and nice uniforms, but they didn’t have joy and they certainly didn’t have life. We don’t have all the soccer skills, the nice equipment, and we wore boys uniforms this season, but our girls are filled with joy and life. If I had the choice to coach one of the two teams, I’d choose the latter every time. No coach, player, captain, or athletic director can instill the kind of unity and love in a team that our team had – only Jesus Christ can do that, and I can say that He did far more than I could have ever asked or imagined. “The ball is going to end up in the garbage someday, but these kids are eternal.” – Mike Giuliano, Former Men’s Soccer Coach at Wheaton College.